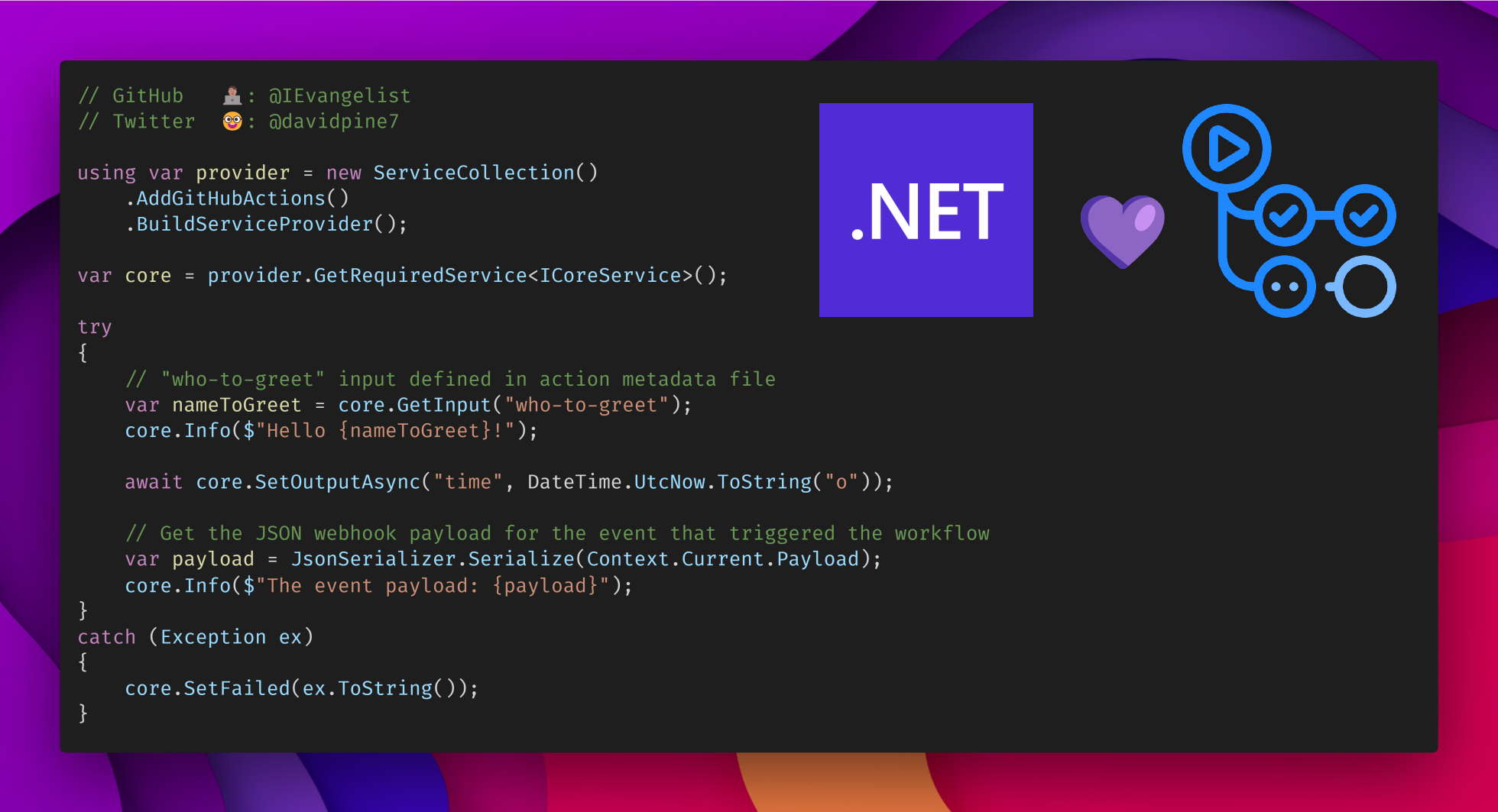 📢 ATTENTION
This post is part of the C# advent calendar 2022, for other articles in this collection see C# Advent Calendar 2022. This is the third time I’ve written for the calendar, past entries include 2017: C# Special Edition and 2018: C# All The Things. 🙏🏽

I wanted to make it easier for .NET developers to write GitHub Actions, so I created an unofficial .NET equivalent of the official GitHub actions/toolkit @actions/core and @actions/github projects.

Why should I care about GitHub Actions?

If you’re unfamiliar with GitHub Actions, the TL;DR; is that they allow you to automate tasks such as building, testing, packaging, and deploying your code. If you want a deeper look beyond that definition, see GitHub Docs: Actions. Just know that GitHub Actions are a powerful tool, and the team has done an amazing job of making them easy to use.

The actions/toolkit specifies the standard I/O, and it defines specific environment variables that are used within a GitHub Action workflow. If you’re familiar with any of my other open-source projects, you’ll likely be aware of my appreciation for what 🤓 TypeScript has done for the web. Moreover, you know that I’m all about that C# 💜.

I’ve been working on various other projects that leverage TypeScript in the world of .NET. There are certainly parallel efforts in this regard, for more information, see Blazorators. As this relates to the actions/toolkit specifically, let’s start by having a look at the possible inputs and outputs, and the formats in which they can be set.

The workflow can write outputs to a file, and even custom state. In the case of output, files are written to the file path from the GITHUB_OUTPUT environment variable. The output in this scenario would be a JSON file that contains anything we want to serialize to and from. We’re not limited by that, it is trivial in C# with the System.IO for reading and writing JSON, and either System.Text.Json or Newtonsoft.Json for JSON serialization of C# objects. In addition to files, any arbitrary string can be written to the log. The log is written to the standard output stream and is available to the workflow. Certain logged messages receive special treatment and are parsed by the workflow as commands. The following are the special messages that are parsed by the workflow:

This code is from the @actions/core project, and it’s TypeScript code that represents a command. The command.ts file exposes a few functions to issue commands. Read through the contents of the actions/toolkit/blob/main/packages/core/src/command.ts file:

A few things to observe about the preceding code:

This is standard TypeScript code, but how might we want to implement this in C#? Let’s take a look at the Command class in Microsoft.GitHub.Actions project:

While inspired, I decided this could be implemented in C#, and with a few minor tweaks — it was. Let’s start by discussing what this would look like in C#. The following is the C# implementation of the Command object, this corresponds to the Microsoft.GitHub.Actions/Workflows/Command.cs:

Another example is when writing a debug message to the log:

One final example is the set-env command:

Welcome to the [Microsoft.GitHub.Actions] .NET SDK. This SDK is used to create GitHub Actions in .NET. The SDK is a thin wrapper around the .NET implementation of the GitHub Actions a select few packages from the @actions/toolkit.

⚠️ DISCLAIMER
This package is not an official Microsoft or GitHub product. It is a community-driven project. However, I do choose to use the Microsoft.GitHub[.*] namespace for the package. I’m not trying to mislead anyone, but I do want to make it clear that this is not an official product.

Either add the package reference to your project file:

Or use the dotnet add package .NET CLI command:

Registering the services for consumption

Compare this to the following JavaScript code in the index.js file from the Creating a JavaScript action: Writing the action code article, which would achieve the same thing with the TypeScript toolkit:

Instead of being able to export any custom data structures, and corresponding functions, the Command object is internal readonly record struct that can be used to issue commands. The following is the C# implementation of the issueCommand and issue functionality:

I’m a big fan of triple-slash comments, and as a consumer of many various APIs written by different authors, I’ve enjoyed learning APIs with good and meaningful triple-slash comments. I say all of this to say, that I’ve omitted them from the code pasted here. If you want to see them, check them out on GitHub. The ICommandIssuer interface has two methods, IssueCommand, and Issue. Consider the implementation that’s defined in the following DefaultCommandIssuer class:

Some commands require interactions with the file system. This functionality is defined as file commands.

In addition to standard commands, file commands are also supported. File commands write to a file instead of the standard output stream. A file command is free to write any value to the file. The following are file-based commands:

The corresponding .NET APIs that are used to issue file commands are:

This code is derived from the TypeScript implementation of the core/src/file-command.ts file:

The C# implementation matches the TypeScript implementation, except for the use of ValueTask instead of void for the IssueFileCommandAsync method. All of the command-issuing functionality is internal to the ICoreService implementation.

The SDK continues to evolve ⚒️

More than 90% of the functionality of the packages/src/core.ts and packages/github/src/github.ts files have been implemented in the SDK.

I’m not going to paste more than 100 lines for multiple files, this blog post isn’t the place for that. If you’re interested in seeing the rest of the SDK, you can find it on GitHub. The SDK is still evolving, and the following features are still in development:

The future is bright ☀️

I’m always open to collaborating with developer community members, 🙌🏽 who are interested in helping this code live on to help others. I do, however, agree with the wise sentiment of Kelsey Hightower in the following Tweet:

The reason I stopped creating new open source projects was because I couldn't afford to maintain them.

I was expected to not only share my work, but continue adding new features, docs, and providing support for free, forever. It just wasn't sustainable for me.

But I’m willing to try to make it work. I encourage you to explore the code and be sure to see the sample use cases.

🤓 COLLABORATE
If you’re interested in helping, please reach out to me on Twitter, or open an issue on the GitHub Actions Core .NET SDK.