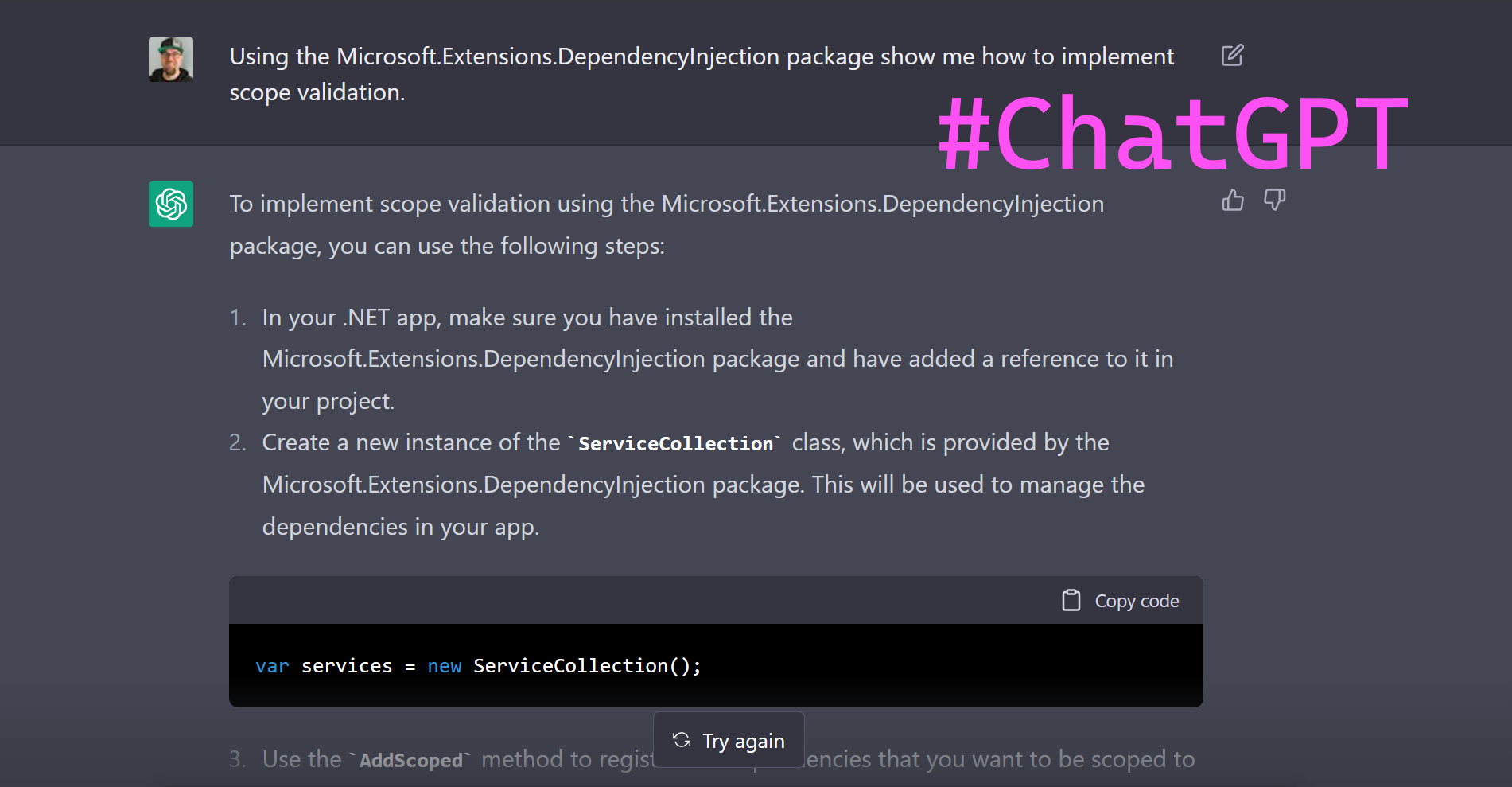 ❗ IMPORTANT
This post was generated using ChatGPT. I prompted the AI with a few leading questions and formatted the responses as the body text of this post. For more information, see the ChatGPT.

A conversation with ChatGPT about .NET Dependency Injection

What is dependency injection and why is it important?


Dependency injection is a software design pattern that allows a programmer to remove hard-coded dependencies and make them configurable. This is important because it makes code more modular and easier to maintain, test, and reuse. Additionally, it makes it possible for different parts of a program to be supplied with the specific dependencies they need, rather than having to rely on a global, static dependency. This can make it easier to manage complex systems and can help to improve the flexibility and scalability of a program.

What’s inversion of control, and how does it relate to the separation of concerns principle?

The separation of concerns principle states that a software program should be divided into distinct sections, each of which addresses a separate concern. By following this principle, a program can be designed in a way that makes it easier to understand, maintain, and extend.

When was the concept of dependency injection popularized?


The concept of dependency injection has been around for a long time, and it has been recognized as an important technique in software development for many years. However, the term “dependency injection” itself was coined by Martin Fowler in 2004, in an article he wrote for the website of O’Reilly Media. In this article, he explained the concept and discussed its importance in software development, particularly in the context of object-oriented programming. Since then, dependency injection has become a widely used and well-known design pattern in the field of software engineering.

How do you install the dependency injection NuGet package in an existing .NET app?


To install the dependency injection NuGet package in an existing .NET app, you can use the following steps:

Alternatively, you can use the following command at the command line to install the package:

Once the package has been installed, you can use the types and methods it provides to implement dependency injection in your app. For more information on how to do this, you can refer to the official Microsoft documentation.

To use the Microsoft.Extensions.DependencyInjection package, you first need to add it to your project using the NuGet Package Manager. Once it’s added, you can use the IServiceCollection interface to configure your dependencies. For example, suppose you have an IFoo interface and a Foo class that implements it. To register the Foo class as the implementation of the IFoo interface, you can use the following code:

This will return an instance of the Foo class that you registered earlier. You can then use this instance as you would normally, without having to worry about how it was created or managed.

Using the Microsoft.Extensions.DependencyInjection package can make it easier to manage dependencies in your .NET applications. It provides a simple and flexible way to configure and use dependency injection, allowing you to improve the maintainability and testability of your code.

What is scope validation and why is it important when using the Microsoft.Extensions.DependencyInjection NuGet package?


Scope validation is a feature of the Microsoft.Extensions.DependencyInjectionNuGet package that helps ensure that the objects created by the dependency injection container are used correctly. It does this by checking that an object is only used within the scope in which it was created. This is important because it helps prevent issues such as using an object after it has been disposed, or using an object from the wrong thread. By using scope validation, you can catch such errors early on and avoid potential runtime issues.

Why is scope validation important in dependency injection?

When you register a dependency in your app, you can specify its scope by using one of the Add methods provided by the IServiceCollection interface. For example, you can use the AddScopedmethod to specify that the dependency should be scoped to a specific instance, such as a request in an ASP.NET app.

If you do not specify the scope of a dependency, it will be registered with the default scope, which is Transient. This means that a new instance of the dependency will be created each time it is requested.

Scope validation allows you to verify that all the registered dependencies have the correct scope, so you can catch and fix any issues before they cause problems in your app. This can help to improve the reliability and performance of your app.

For additional reading, see the official Microsoft docs on dependency injection , and be sure to check out ChatGPT from OpenAI.