I am returning home from a long trip in Serbia for IT Konekt . This was literally a trip of a lifetime and I could not be more grateful for such an amazing opportunity. Serbia has such an incredible culture and powerful history. I have been overwhelmed by the care and attention to detail from the organizers of IT Konekt. This was my first time ever leaving the United States of America and I didn’t know what to expect. I was really nervous but equally excited. This was more of a journey of epic proportions than it was a conference trip.

I want to publicly thank Maria Naggaga of Microsoft for referring Milica Radovic and Milica Nastasic to me. They were looking for someone from the U.S. to speak about C# and Maria suggested me. This is the such an honor and I couldn’t have been more excited to represent the U.S. and C# for my first international speaking engagement.

Our journey began in Belgrade – the capitol city of Serbia. I arrived on the same flight into Belgrade as Jonathan LeBlanc of Box. In true movie fashion, our driver was waiting for us holding our names at the arrival gate of the airport. This was a warm welcome and made me feel special. After a 35 minute Car:Go (European Uber) drive we arrived at our hotel and while I didn’t get much sleep on the plane, I had energy from both the adrenaline and excitement. Just as soon as I was settling into my room, it was time to part for the first of seemingly countless speaker dinners. We were hungry and ready to immerse ourselves in the Serbian culture. We had a traditional Serbian dinner after a celebratory shot (or three) of rakija - “serbian fruit brandy”. Now, if you’re like me you probably didn’t know what rakija was… warning it is very strong! They fed us like kings and queens, we were treated like royalty! 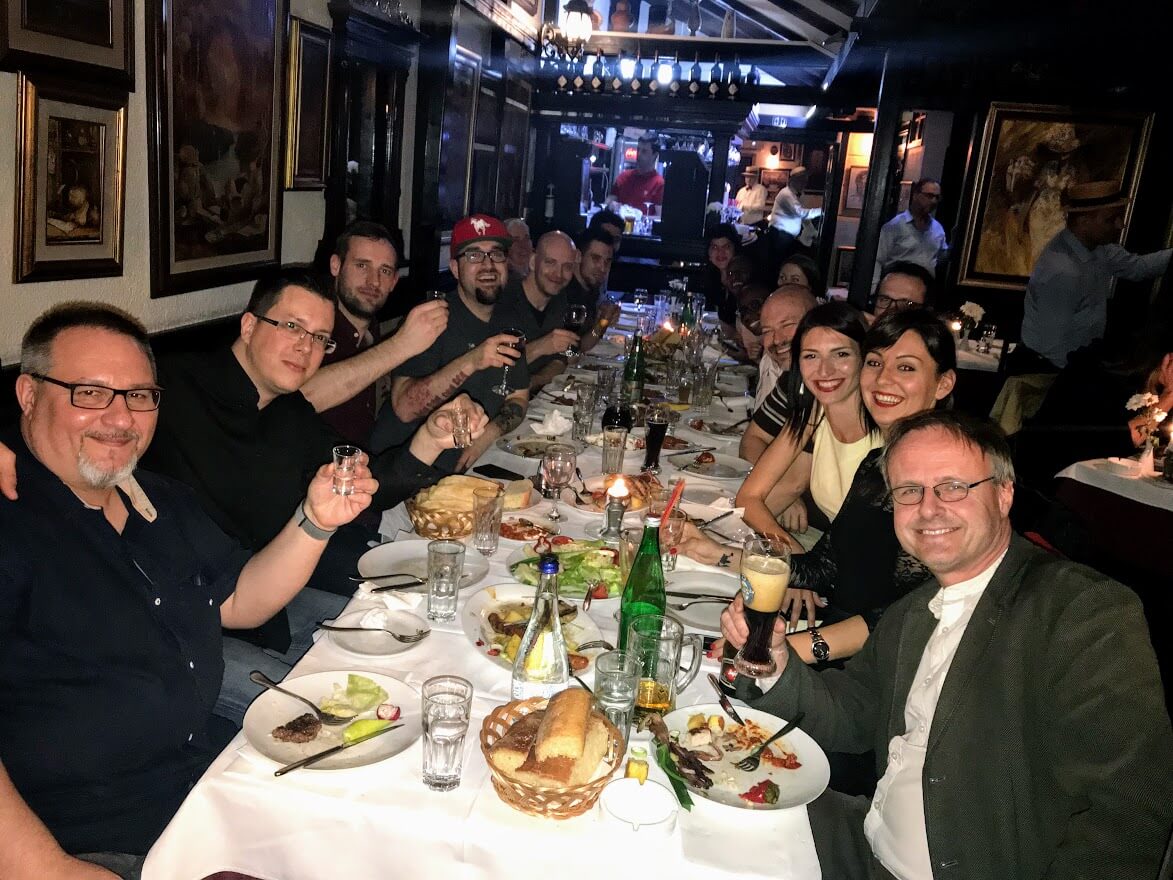 Harry Roberts sat to my right - he was a blast. He and I shared a lot of common thoughts about the developer community. I really enjoyed his company. I asked him if he was on Twitter so that I could follow him - yeah 58k+ followers. The food was great. The people of Serbia know how to do meat, I might get myself banned from the United States for saying this but it is true, “Serbia has the best bacon in the world!” After a long night, I returned to my hotel where I immediately fell asleep.

I woke up at 8 AM, I then decided I would rest my eyes a little longer (suffering from jetlag) I opened them again around 11 AM. My talk was at 4, so I had plenty of time. It was conference day, I was prepared and looking forward to giving my talk. I believe that presenting on C# was an excellent choice – it is a universal language. The attendees really enjoyed it and were thoroughly engaged. The only time people had their phones out were for taking pictures of me or the slides. I was asked to take pictures with several attendees both before and after my talk. This was the first time this has ever happened to me and it made my day!

In addition to a great conference, Jonathan LeBlanc and I took a casual stroll through Belgrade. We ended up walking over 14 miles and visited the Belgrade fortress. Along the way we were asked to help someone lift an A/C unit up a shaky ladder onto a roof within a closed market. 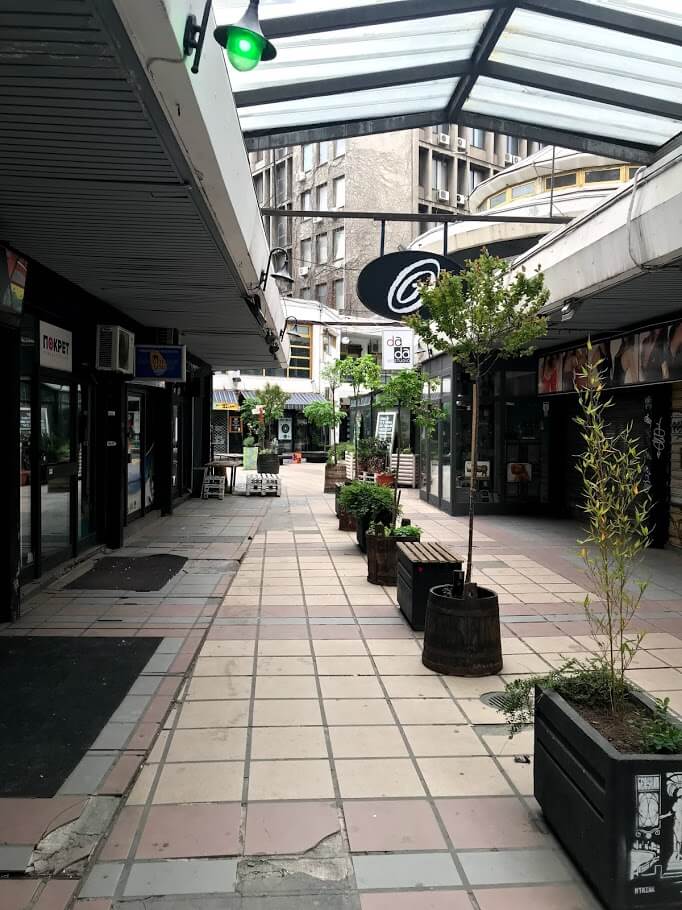 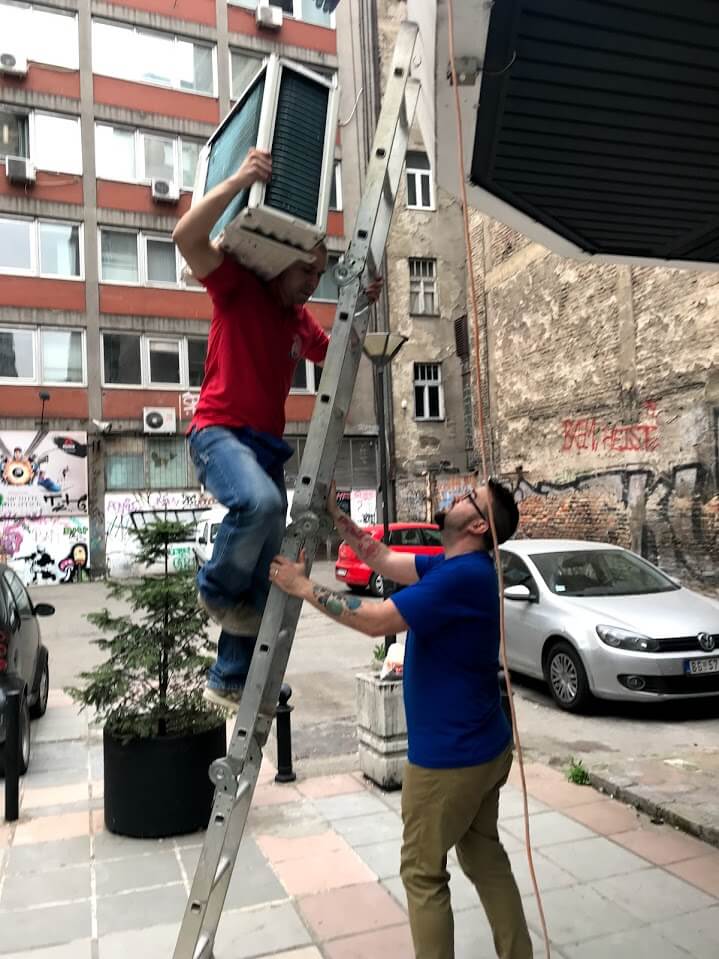 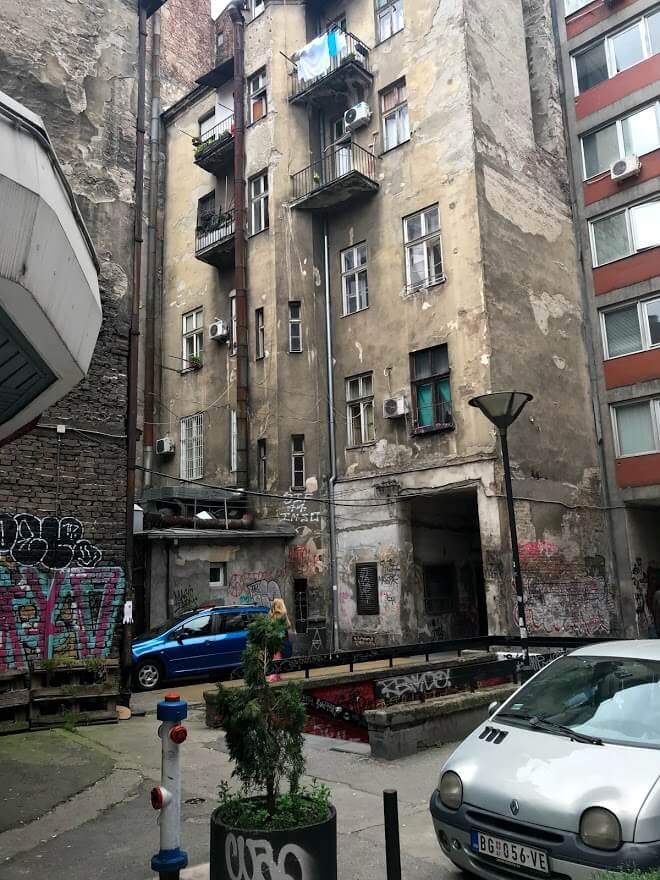 No one was injured in the photographing of this event…our walk continued with no more interruptions. We arrived at the Belgrade fortress and it was very interesting. We were able to walk all over it, in the moat, in tunnels and even on the walls. Once we made our way to the back of the fortress we found a hill with a view. Here is a great shot from the fortress walls overlooking where the rivers meet - it truly was a remarkable view.

While touring the fortress we stumbled upon a torture museum, Jonathan and I decided “why not”. After the first few exhibits we kept asking each other “what the hell were we thinking!” I was tempted to share some of the pictures from the torture museum but nope, I’ll spare you the pain. Once we were finished witnessing the horrors, we were spent…we walked back to the hotel.

Sunday was traveling day and we were driving to Niš. The core group of speakers got to know each other extremely well during the trip, and I consider them all personal friends now. We spent hours in a jumbo van traveling the country of Serbia over the course of a week - quite the adventure. The core group of speakers were Jon Galloway, Jonathan LeBlanc, Håkon Wium Lie and myself. 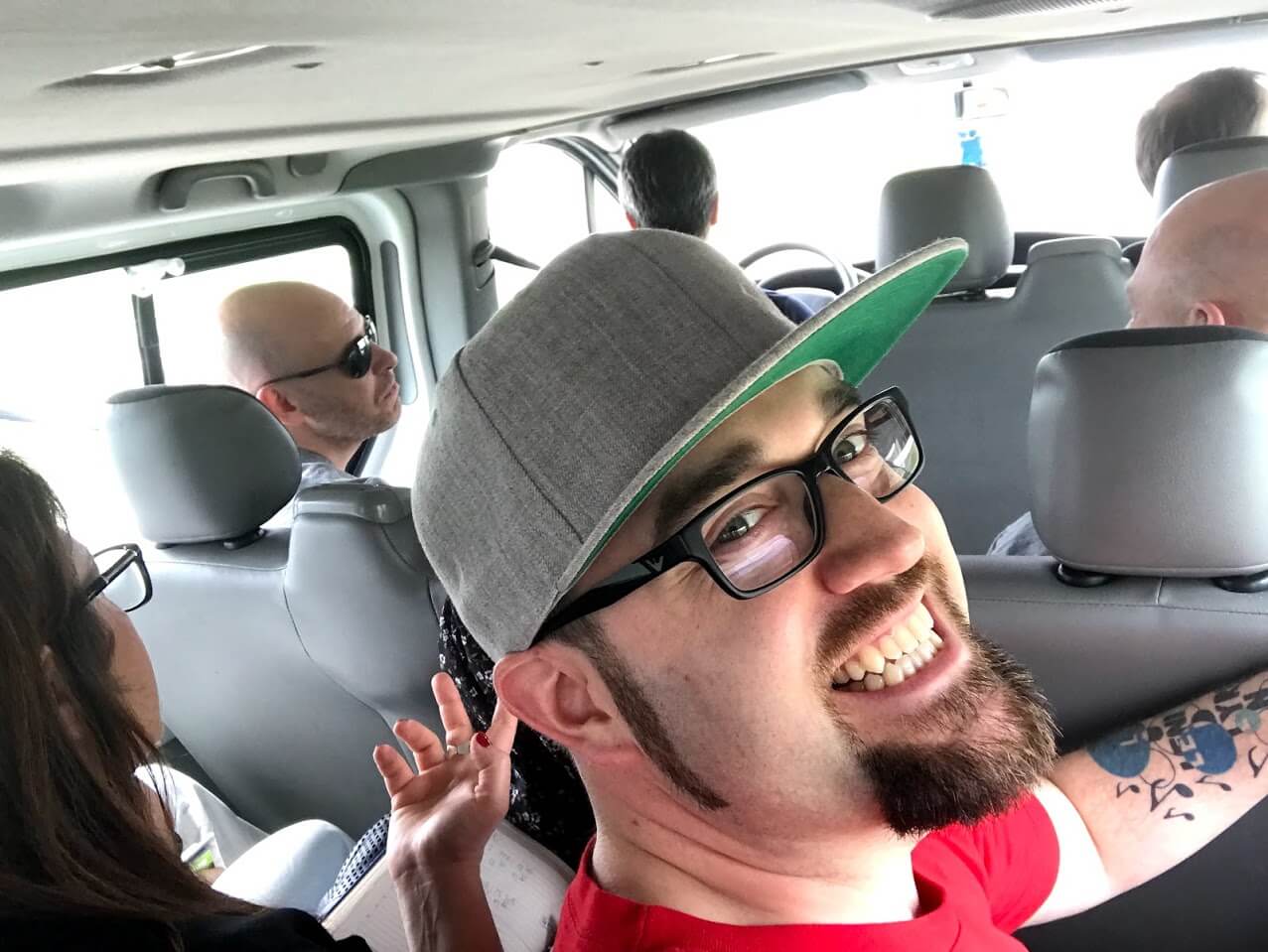 When we arrived in Niš, we were greeted by several hosts. One of them was Jovan Milic and I’m referring to him from now on as the “humble giant”. If you’re ever looking for inspiration read his story, it will hopefully put things a little more into perspective. For me, I can relate very much to his story and appreciate all the things that he’s done to earn his place in the world now. The next time you want to complain about the things you take for granted, remember his story and support his cause . 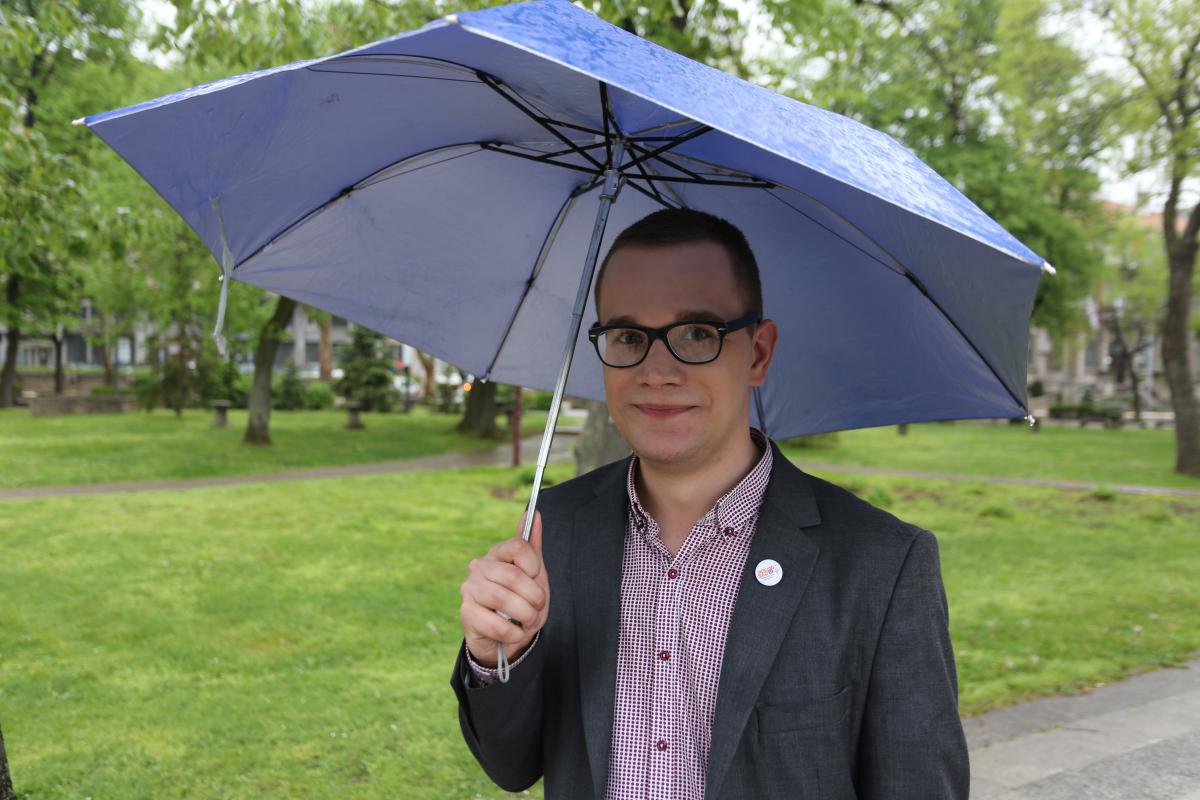 There are several life lessons that I live by - this is one of them.

Expect nothing, but be grateful for everything. David Pine

Jovan and the other hosts treated us like celebrities. We had a walking tour of the Niš fortress and city center. After arming ourselves with some umbrellas we were ready to take on the light rain. My umbrella just so happened to be pink. I’m not sure the color of my umbrella is relevant for this story, but I felt inclined to share it. After strolling around the fortress and then making our way back towards the city center - we needed some caffeine. We enjoyed turkish coffee and dark beer, because why not both?! I recall this evening very well, this is the night that Håkon told us about the time he built a balsawood raft with a group of volunteers. The raft weighed over 20 tons, and the intended purpose was to set course from South America (Peru) and sail to Easter Island. Why, you might ask - as both Jon’s and I did…we were intrigued, why on earth would anyone want to do this? Simply to prove a point that it could be done. It would prove that Easter Island could have been inhabited by the people of South America. This voyage took place in 2015-2016 and was the spot light of world-wide news, for more details checkout the official website and the story from Håkon himself here .

Again we enjoyed a traditional Serbian dinner. There was more rakija and as luck would have it, traditional Serbian music was played/performed live…with the livlihood from the rakija there was dancing and singing, and all around celebration. Such a joyous time! 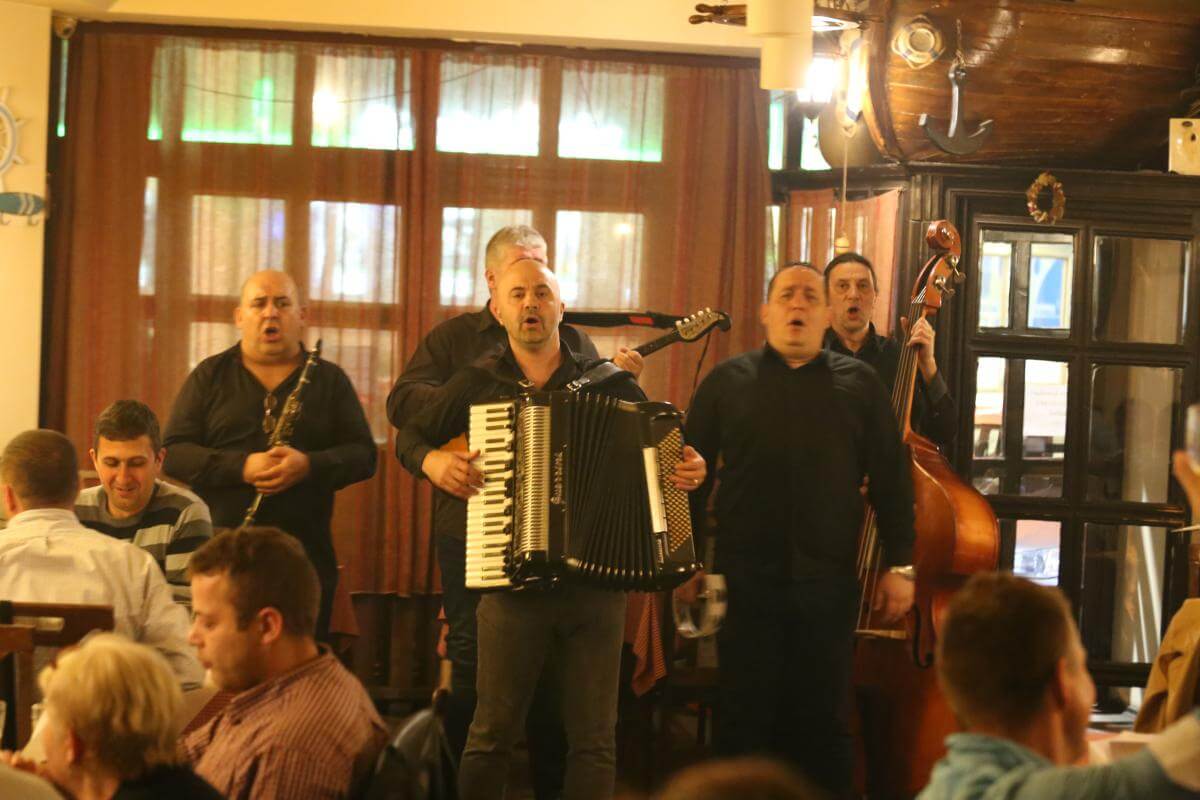 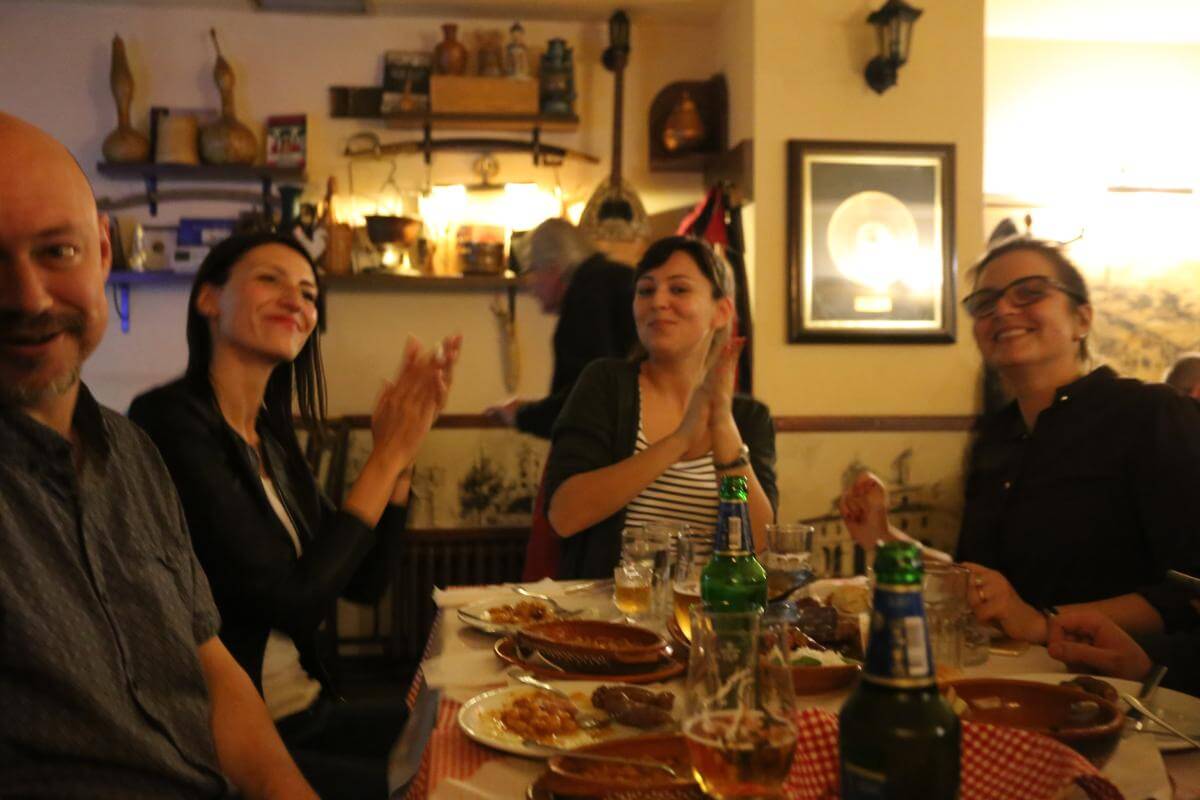 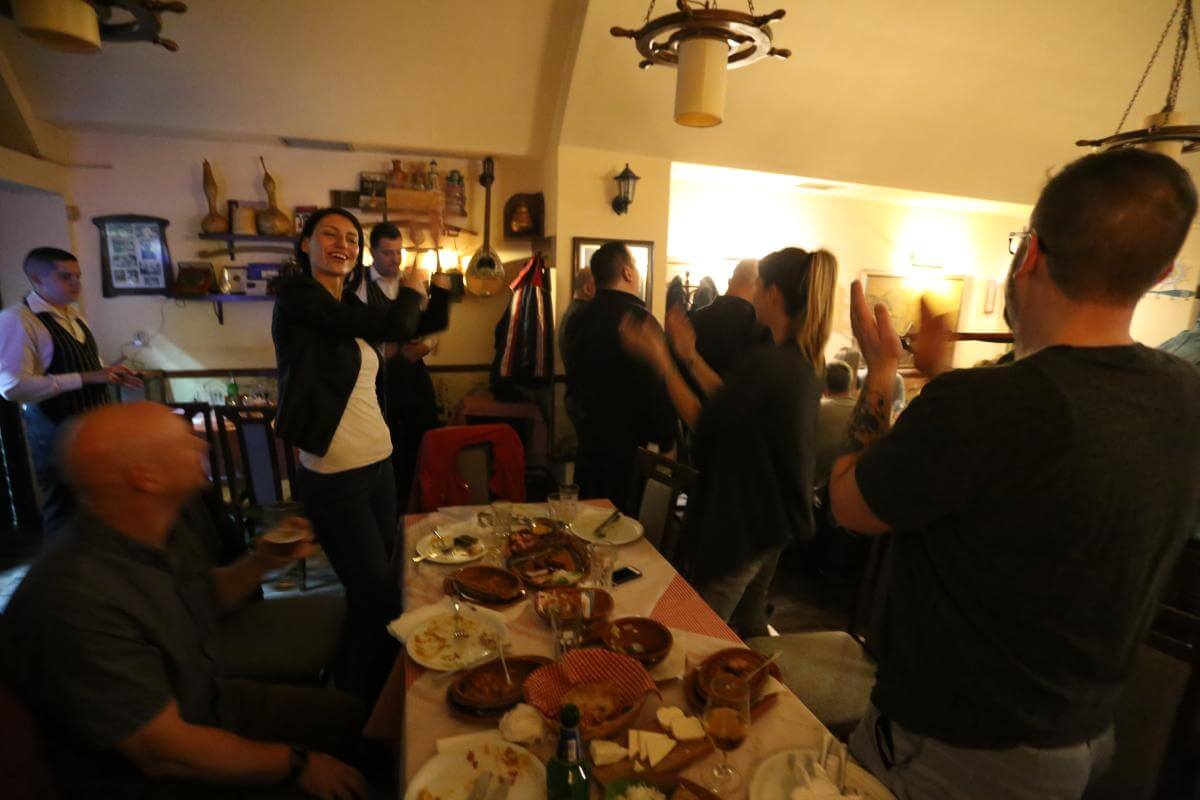 Conference Day! The stage was set. The crowds were drawing near, anticipation was building. News crews, wait…news crews? Yes, we were actually interviewed and made it on the Serbian national news - several times. This was yet another first for me. The media was interested about our take on the IT community in Serbia. They were curious about how the developers of Serbia rank up against the rest of the world. That is a hard question to answer, but one thing was consistent with all of our responses - we believe that any developer can change the world! When you take talent, an idea and hunger to build something incredible there is no limit to what you can achieve. 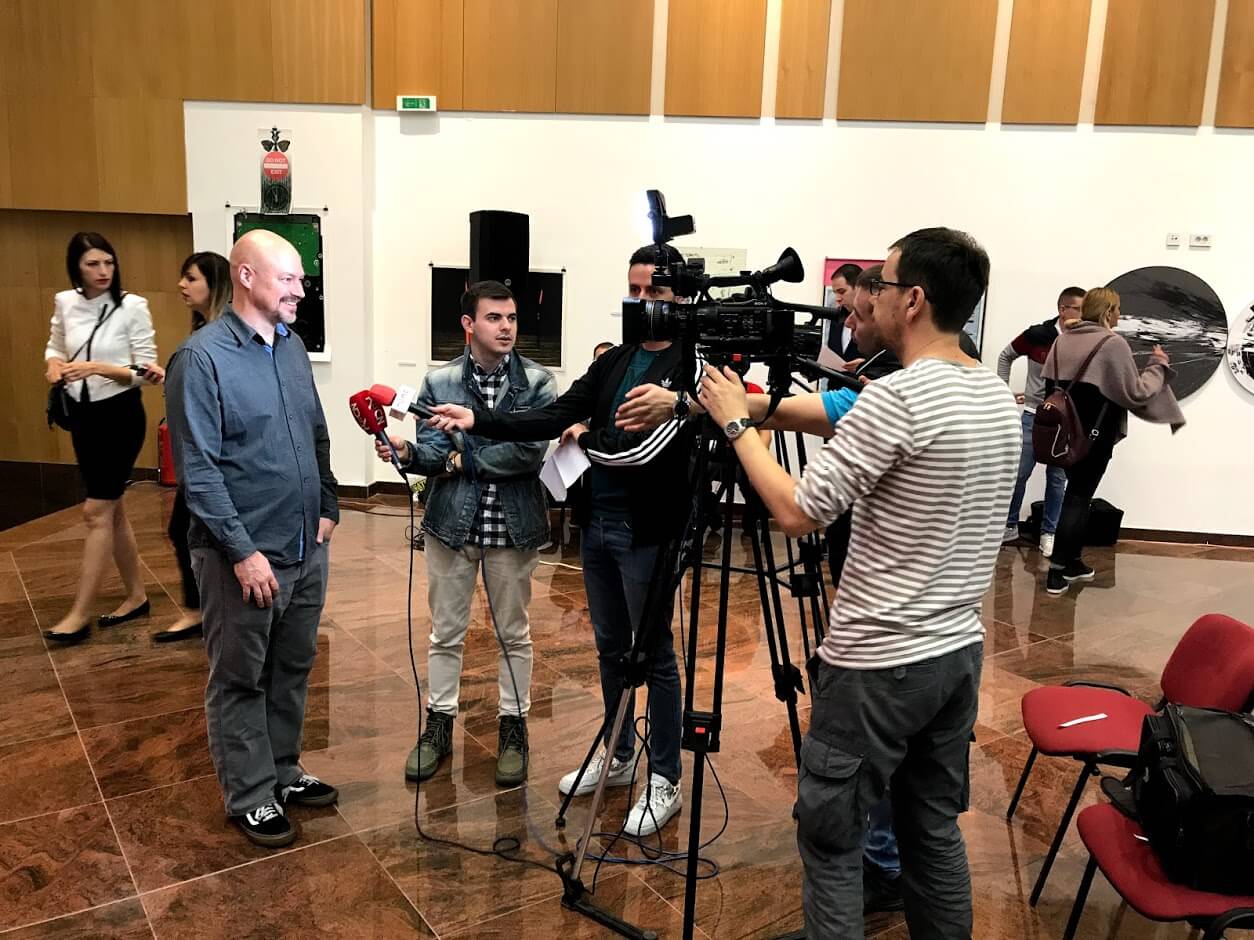 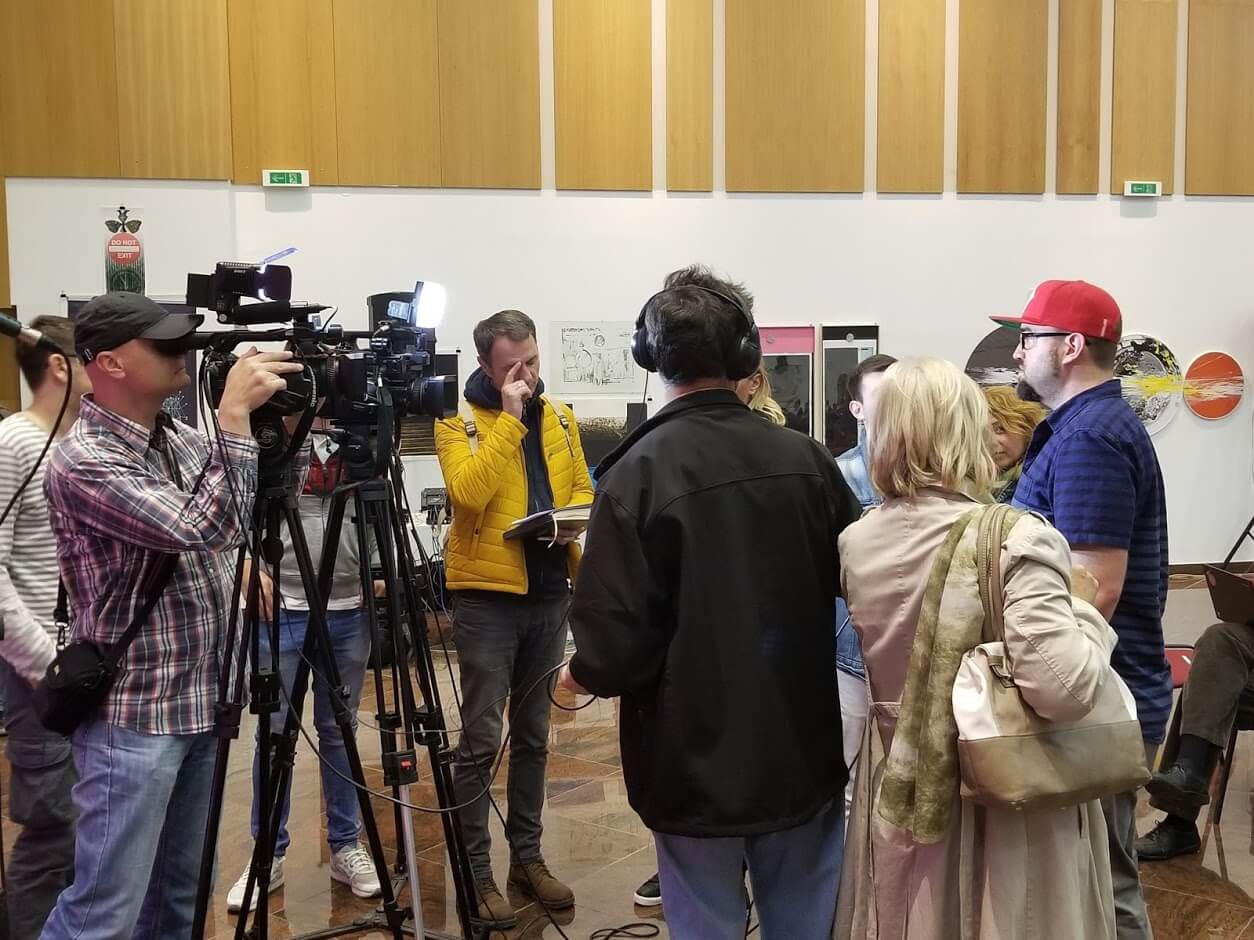 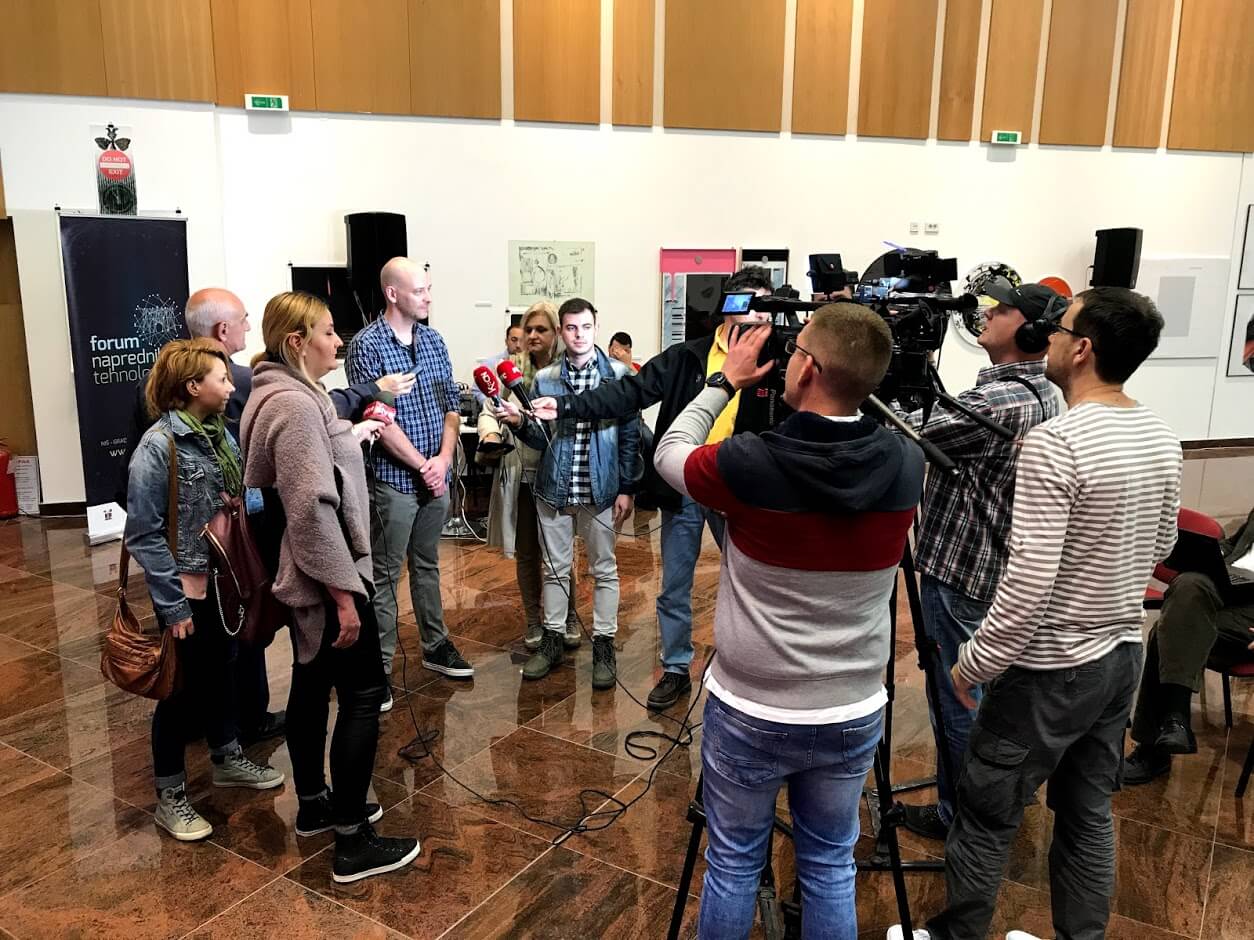 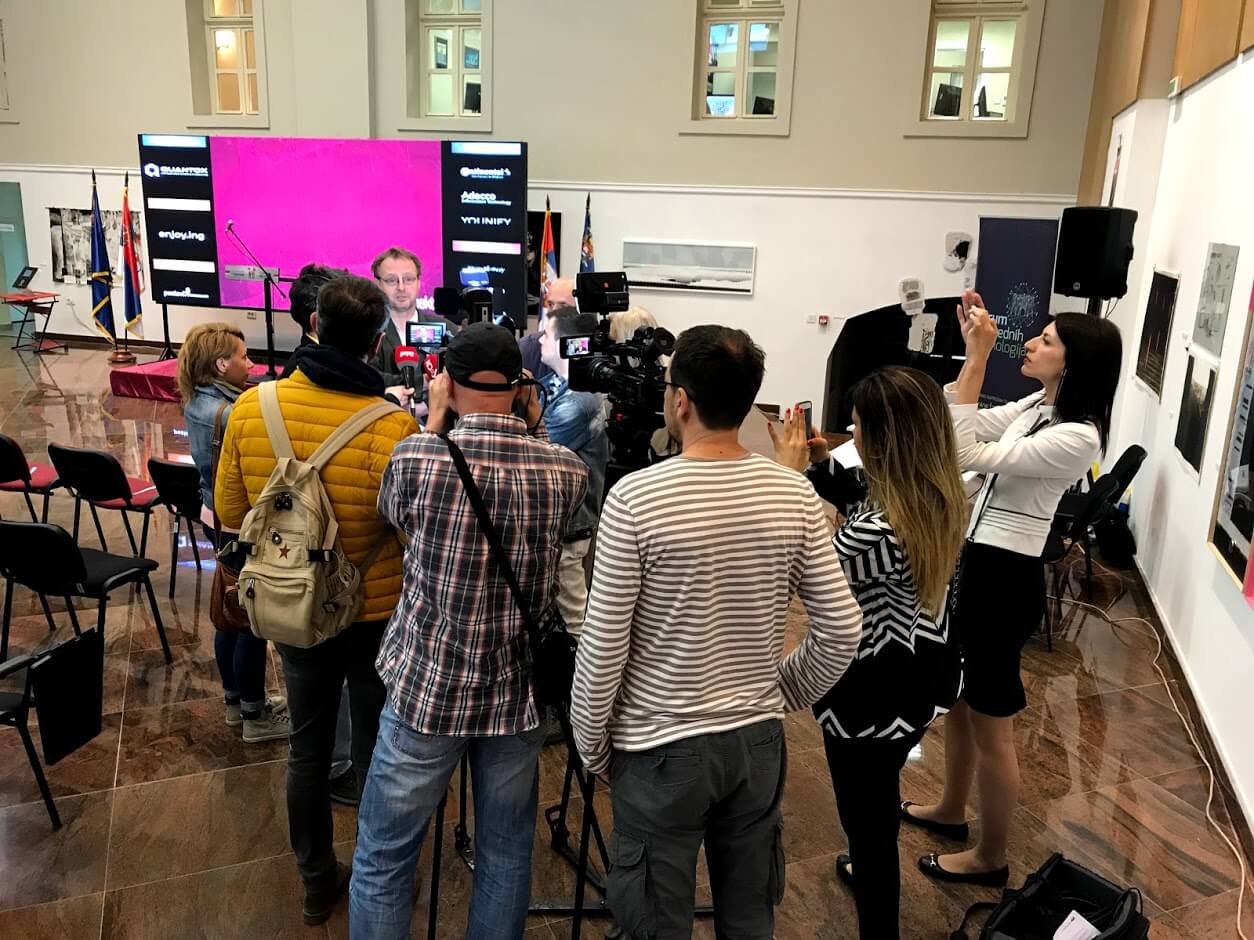 The conference talks were all really well received. The developer community seemed eager to ask questions after sessions. As a speaker, this is what makes it all worthwhile - the gratifying moment when you know that you’ve been able to help someone and that you’ve delivered value. After the conference we spent more time walking around Niš, this is when I learned that Håkon brought a drone. We took turns flying it and taking pictures of the scenery.

Wednesday was another traveling day. Our jumbo van trip was scheduled to take roughly four hours. But before we left, we were asked to be part of a ceremony with the President of municipalities, the mayor of Niš. The press was there to capture the moment. It was incredible sharing ideas for shared working spaces and encouraging hackathons. Our hosts served as translators, communicating our ambitions and guidance. The mayor was so pleased that he presented Håkon with a special honor - a medallion of Constantine the Great.

IT experts are visiting the municipalities of Crvena Krst.

Shortly after the ceremony, we drove to Novi Sad. We arrived without a hitch, settling into our hotels. Followed by a city tour, which proved to be a spectacular site. Dinner was at the Terasa . This sits right on the Danube river and at the foot of the Novi Sad fortress. Håkon was able to capture some amazing footage with his drone…the view was beautifully stunning.

The 19th was a really relaxing day, we had a walking tour, lunch on the Danube river, followed by a wine tasting at the Museum of Beekeeping and Wine Cellar Zivanovic . Again, Håkon let his drone capture some of the essence and scenery. This video starts well beyond the town center, working its way back towards where we had lunch on the river. Yes, that establishment in the distance is where Håkon is navigating his drone recording this clip. I am seriously trying to convince my wife to let me purchase one of these drones. If you want to buy it for yourself here is the link .

This footage is amazing, video quality up to 4k if you’re into that sort of thing…

The final conference day! I was up first and immediately following my talk, I needed to catch a cab back to Belgrade to catch my flight back home. I was sent home with a parting gift from the founders. I love the thoughtfulness, and it is so true that it’s better than a notebook and a pen.

I was excited to be returning home. I know that I was missed by Lyric, Londyn, Lennyx (my three sons) and Jen (wife). I’m thankful to have had a safe trip and shared so many awesome experiences. For those interested in the conference itself, I’ll be posting videos and more photos as they are released. For my talk, see below.

I have been using GitPitch for a while now, and I love it. Kudos to David Russel (the creator). For more details on GitPitch checkout the official website by following the link below.

Here is the link for my talk, What’s new in C# . This was the talk that I presented at all three IT Konekt conferences.

I was blessed to have made so many new friends on this journey. These people are inspiring, you should follow them as they are true leaders!