This is my third year organizing MKE DOT NET , so I’ve been accumulating plenty of interesting stories. Last year I was fortunate enough to have convinced Scott Hanselman to be our keynote speaker. Yes, “the Scott Hanselman ” - arguably the worlds most influential person in the tech industry. I was his ride to and from the airport and the conversations we had actually led to several key changes. As a result MKE DOT NET will be even better than ever before!

Had I looked at the lineup of speakers prior to agreeing, I would have declined

My mind immediately started racing with thoughts like “does he only want to speak with well-known speakers” or “is this too small of a conference for such a celebrity?”. None of these thoughts were the least bit accurate. In fact, the reason was simple “we were not inclusive enough”. Honestly this was something that I didn’t even think about. I was driving Scott to the hotel where he was going to stay. The hotel was also the place where the conference was to be held. 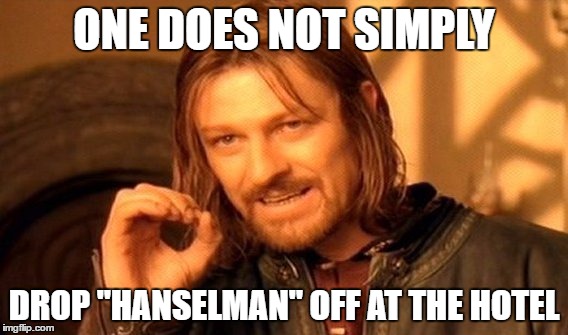 No…he requested that I give him a guided tour. He wanted to see the room layouts, he wanted to test equipment, ensure lighting, sound, connectivity, etc. We actually ended up reorganizing the entire layout of the keynote room as well as changing the number of projectors. His “perfectionist” side was shining through and it was really resonating with the team. Clearly he has done this a few more times than we have!

One of his initial comments was hysterical:

This kind of looks and smells like grandmas house

He was referring to the decor of the hotel (very 60’s) and that the halls had a stale scent of mildew (the hotel has a water-park in it). Having just taken a sip of water, I nearly spit it out of my mouth in laughter - finally someone said what we had all been thinking! This resulted in a change of venue for 2017 and years to come. We’ll be at Potawatomi Hotel & Casino this year. The new joke is obviously that it will now smell like cigarette smoke instead.

The truth was simple. MKE DOT NET 2016 only had one woman speaker and ironically she was speaking about Diversity. We were ready to lick our wounds and rise above it. I’m so proud to be part of this change and happy to communicate that MKE DOT NET now takes an active approach to ensure a more diverse speaker lineup.

This year, we started leveraging PaperCall.io as our event management system. It allowed us to make the speaker voting anonymized - but you’re probably wondering how that helps with diversity. It actually doesn’t and that would be naive to assume so. What we did was invite Ashley Powell and Samrat Saha (both MKE DOT NET speaker alumni) to join our technical committee. We loved that they were both eager to help and happily joined the team. They both have been a major part of the entire process and helped with the CFP outreach efforts. We believe this led to more submissions from their networks, ultimately leading to a more inclusive speaker lineup.

Of the 24 sessions and including the keynote, we are proud to have eight women speakers this year! If you’re a numbers person - that is an 800% increase year-over-year and we plan on doing even better as we evolve. We are actively making our conference as inclusive as possible - and we celebrate the communities participation.

We are only going to grow and learn and become a better more cohesive unit as time marches forward. We are evolving! The people who make up the team are so passionate about bringing forth their visions for a better Midwest technical community. But that isn’t without conflict or disagreement. In fact our team is great at hashing things out. Not every idea is the best! Knowing how to work together and encouraging ideas is key. We foster an environment which breeds creativity but also bases our direction on results. The team shares a vision and we strive to make that vision obvious.

Of course none of this would be possible without our strong community. I’m proud to play my part and contribute what I can, and I’m humbled to be immersed in such a rich pool of technical knowledge and passion. It is inspiring to see the things we’re doing and even more so to be involved! Often the hallways of a technical conference are the stomping grounds for some of the best bits of conversation. In my regional speaking engagements this year I’m hearing just how amazing we are in the Midwest time and time again. I’m grateful for all of these awesome success stories.

Being that the entire team cannot always be in the same place at the same time - it is vital to leverage tools that allow everyone on the team to work together. This will serve as a simple listing of some of things that we have used along the way.

A word on the website, we use for source control GitHub - and it is actually a static website. It uses HarpJs which sits atop NodeJs . Updates are seamless and fast with Visual Studio Code - .

I spoke at Indy.Code() in Indianapolis back in March, 2017. It was a great experience and the folks over at Amegala really know how to organize a technical conference! Anyways, prior to one of my talks I was asking the crowd a little about technical conferences in Indianapolis. I was told that Indy.Code() was the first major conference in seven years. When I asked them what they do to fill that void, three of them immediately shouted out.

We travel to Milwaukee, WI in the fall for MKE DOT NET - it’s a technical conference!

What a small world, hey! They were extremely excited to learn my role…and I too shared in their excitement. For in that moment I knew that all the hard work was paying off.

A sincere thank you is in order for everyone who makes this possible. Thank you to Maria Naggaga for not only being willing to speak at MKE DOT NET , but responding to my ask within minutes - stating that she would be honored! Thank you to the community, the speakers, those who submit who don’t get to speak, those of you who attend. Thank you to Centare for supporting all these efforts year-after-year and the investment back into the community. Thank you to all the sub-committees of MKE DOT NET that give their brilliance and support taking on tasks like, marketing, driving attendance, seeking sponsorship, creating and maintaining the website, deciding on scheduling, venue, meals, logistics, all the countless planning efforts - thank you. Anyone else that I couldn’t think of, thank you!