If you’re a web developer, chances are you’re familiar with optimization strategies such as static file caching and response compression. I recently implemented these two concepts in tandem on an ASP.NET Core application that I have been developing… I’m going to share what I have learned.

If you haven’t had a chance to use ASP.NET Core yet, you’re missing out! As my friend Scott Addie likes to say:

ASP.NET Core is a cafeteria plan in which developers choose application dependencies à la carte. This is in stark contrast to ASP.NET proper, where developers are provided a set meal (a bloated dependency chain) containing undesired items. Don’t like broccoli with your steak? Maybe it’s time to consider ASP.NET Core. Scott Addie

In other words, all dependencies are pluggable middleware. This provides ultimate control as you have to explicitly opt-in for the middleware you desire.

Not all middleware is equal. Different middleware serves different purposes (obviously). Try to think of each middleware as its own standalone feature-set. Not all middleware is given a chance to execute on a given request. Certain middleware might send a web response and early exit. This can prevent other middleware in the pipeline from executing at all. In fact, this is the case when using static file caching and response compression together.

The order in which middleware is added matters and dictates the order of execution during a request.

I wrote a tiny application and put it up on GitHub, check it out here if you want to follow along. Now let’s install the dependencies we’ll need. For static file caching and response compression we need to add two dependencies to the project.

Note: Microsoft.AspNetCore.StaticFiles will already have been installed if you started from a Visual Studio template.

There are two common nomenclatures that exist for wiring up middleware in your startup classes, the .Add* and .Use* extension methods. The .Add* calls are intended to add services to the IServiceCollection instance, ensuring that they are ready for usage. The .Use* calls specify that you want to use the middleware and makes the assumption that any services required by DI will have already been added with the corresponding .Add* call.

Now let’s “add” response compression in the .ConfigureServices call of our Startup.cs.

Several bits of the implementation details should jump out at you. First, we do not need to call an .AddStaticFiles extension method because there are no services required for this middleware, as such it doesn’t exist. Second, we are providing a lambda expression to satisfy the Action<ResponseCompressionOptions> parameter. We also assign the .MimeTypes property from the ResponseCompressionMimeTypes.Defaults we are targeting for compression.

If no compression providers are specified then GZip is used by default. ASP.NET Core Team - GitHub

The ResponseCompressionMimeTypes.cs is defined as follows:

There are several types defined by default in ASP.NET Core class ResponseCompressionDefaults.MimeTypes, we are simply expanding that to include “SVG” images and the “Woff2” fonts.

The snippet above will absolutely work for serving static files, but it will not compress or cache anything. Note the differences below:

Now that we have these two pieces of middleware wired into out pipeline in the correct order, what else is left. There is one important thing that we forgot to do. While we do have static file middleware, we didn’t know that “caching” is off by default. So we’ll need to handle this with an instance of the the StaticFileOptions.

Keep your ’s open for extension method overloads. These are often clues that there are options for providing customized configuration for the middleware you’re wiring up.

The instance of the StaticFileOptions object has a public property namely “OnPrepareResponse” of type Action<StaticFileResponseContext>. So we can again specify a lambda expression. This expression can be used to delegate the preparation of the response. Notice we’re simply setting the Cache-Control header to a “max-age” of a week. That was pretty simple, hey?!

It’s all the little things! The response compression middleware boasts deterministic compression, i.e.; if the KestrelHttpServer is running behind the IIS reverse proxy then the middleware may or may not compress the response. The middleware determines the following:

Let’s spend some time examining the results of our response optimization efforts. 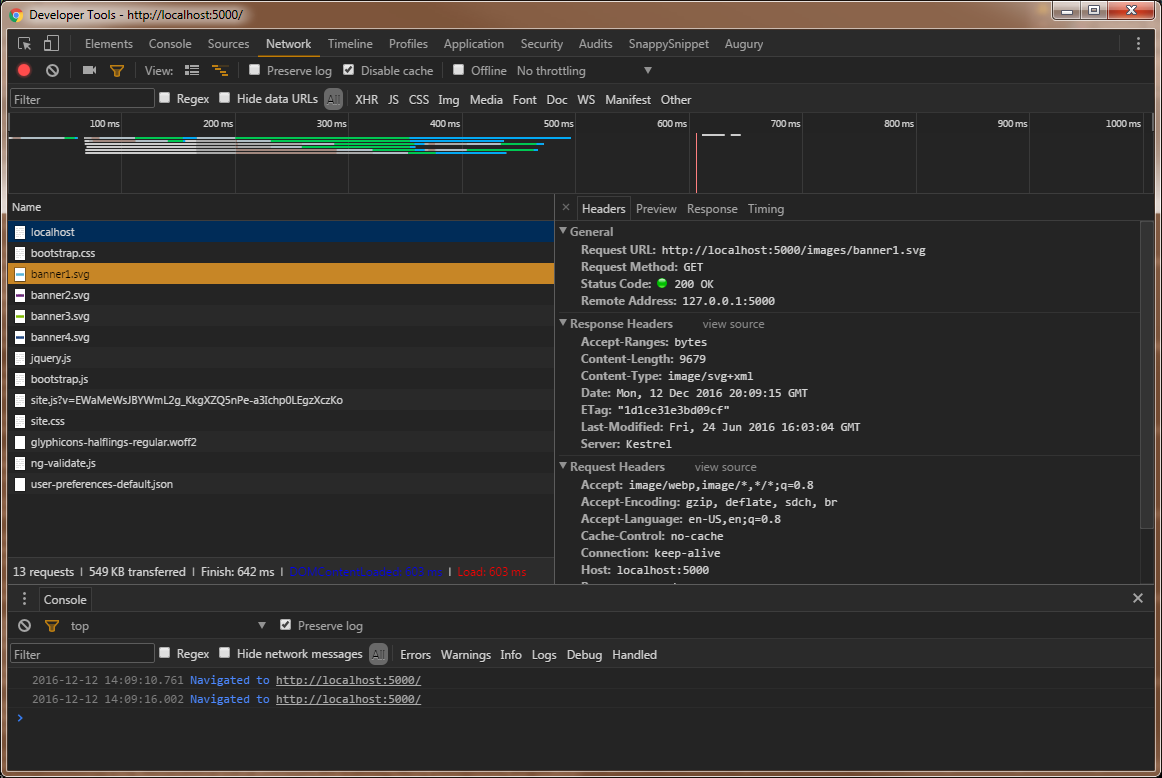 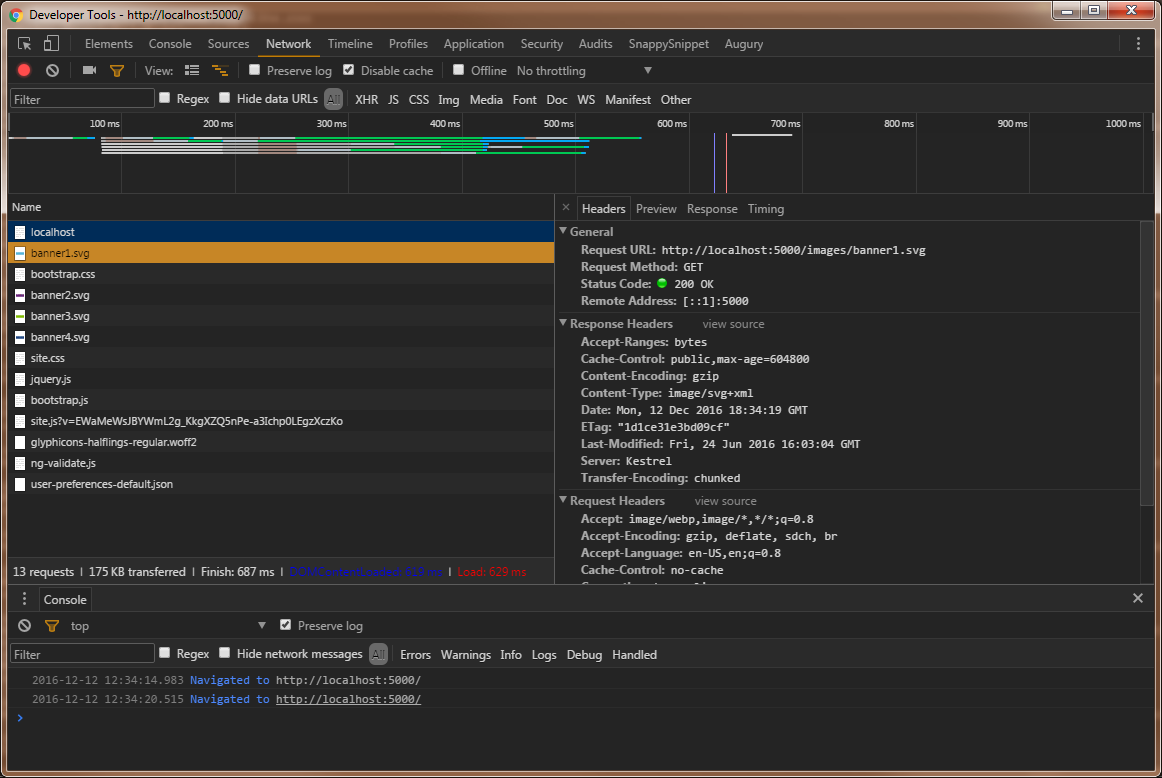 The total payload for all 13 requests is a total of 3.137 times smaller (a meager 31.9% of the original size). The larger the application, the more dramatic and valuable this becomes! Consider an Angular2 application (or other SPA framework based application), which has tons of JavaScript files to download – 5 MB turns into ~1.5 MB. 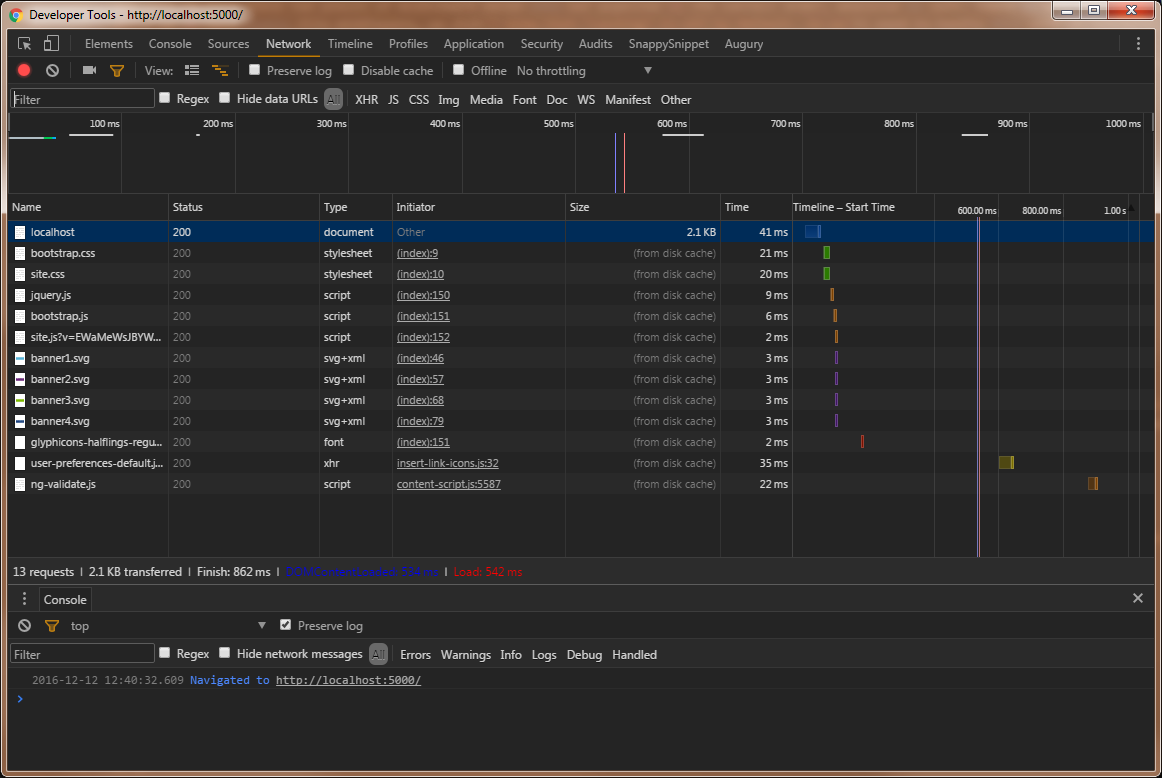